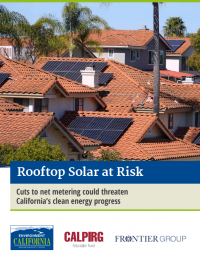 According to a new report from the Environment California Research & Policy Center, drastically reducing net metering fees and charging high, all-solar fixed fees could slow the growth of rooftop solar systems – and in extreme cases lead to a collapse in installations. CALPIRG Education Fund and Frontier Group.

The report comes as the California Public Utilities Commission (CPUC) is considering changes to the state's net metering program, which compensates solar owners for the excess electricity they sell back to the grid.

The report, Rooftop Solar at Risk: Cuts in net metering could threaten California's cleaner energy advances, highlights several case studies of how solar offsetting is affecting installation rates. Several studies looked at California's public utilities, which are not required to adhere to CPUC net metering guidelines, and showed that reduced tariffs had slowed the use of solar power.

In Arizona, the Salt River Project introduced new rooftop solar fees and guidelines that have nearly doubled the payback time of solar projects. The acceptance of solar energy fell between 50 and 95 percent after the changes.

Nevada's net metering pay cut in 2016 was followed by a 47 percent cut in residential solar systems over the next year. Nevada eventually reintroduced net metering.

California law requires the state to achieve 100 percent clean electricity by 2045. To do this, the state estimates that the state will need 39 GW of customer-side solar power, nearly quadrupling the solar capacity currently distributed in California.

"Rooftop solar is cheaper, more efficient, and accessible to more Californians than ever before," said Jenn Engstrom, state director of the CALPIRG Education Fund. "California has so much to gain from investing in rooftop solar in our homes, schools and businesses, but the utility's proposal to offload net metering is effectively pushing rooftop solar off the market."