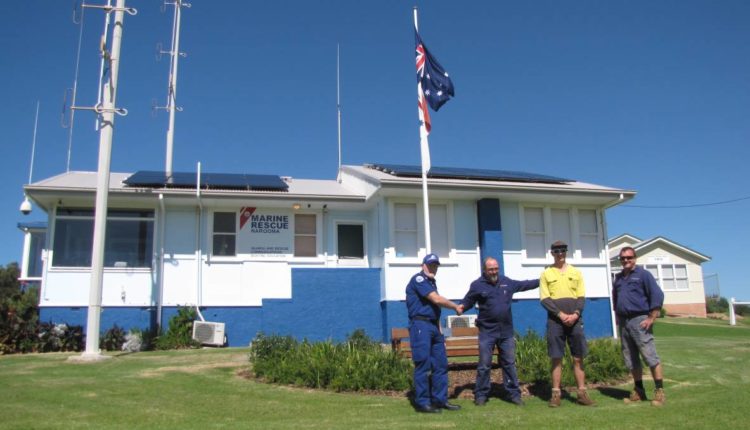 Narooma Marine Rescue received a new solar system and battery backup which, thanks to the SHASA volunteer group, will expand the existing emergency power supply for wireless communication.

The Southcoast Health and Sustainability Alliance (SHASA) is a voluntary community group committed to supporting the transition of renewable energies. Together with Micro Energy Systems Australia (MESA) from Bodalla, they have just completed their 11th solar system on community buildings in Eurobodalla, including their third in Narooma.

SHASA spokeswoman Kathryn Maxwell said the latest project on the roof of Narooma Marine Rescue was recently turned on after initially encountering a problem following the initial proposal in 2020.

"The roof of the Marine Rescue building was made of corrugated asbestos and had to be replaced for safety reasons before the solar panels could be installed.

"The 6.3 kW PV solar system is coupled with a 6.3 kWh battery, which extends and expands the existing emergency power system and takes care of wireless communication.

"The new hybrid system backs up the small uninterrupted power supply (UPS) packs that support telephone and Internet communications and maintain lighting in the building during a power outage," she said.

SHASA applied for grants on behalf of organizations to fund installations with the first Narooma system installed at Monty & # 39; s Place and a second installed in the new Narooma Men & # 39; s Shed.

"Some of the grants only partially covered costs, and where the organization had limited resources, SHASA and MESA covered the shortfall," said Ms. Maxwell.

If you are part of a community group that could benefit from a solar system, SHASA would love to hear from you by sending an email to contact.shasa@gmail.com

SHASA supports projects in the field of renewable energies, sustainability and resilience of the population throughout the Shire.