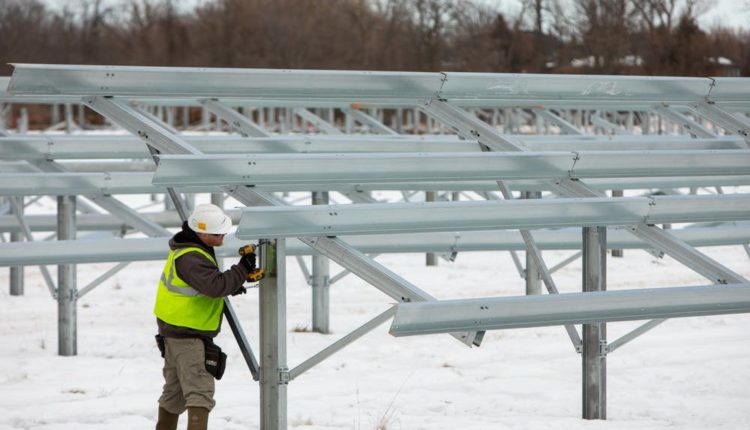 UB has started the construction of five floor-mounted solar modules around the North Campus, which are expected to be completed by autumn 2021.

The five new locations – four along Bizer Creek and a larger one along the Amherst Bike Path on the UB property – are expected to produce a total of 11.2 million kilowatt hours (kWh) of energy, according to a UB statement. UB is currently generating around 400,000 kWh from its Solar Strand location, which is located at the Flint Road entrance of the North Campus.

"This spring the university will also publish an external solar RFP (Request for Proposal)," UB spokesman David Hill told The Spectrum. "Together with the on-site projects, this will cover 100% of our direct electricity consumption."

These panels are part of UB's ongoing climate action plan, which consists of 10 initiatives over a 10-year period, said Ryan McPherson, UB's chief sustainability officer. The plan is part of an effort to get UB to get 100% of its electricity directly from clean energy sources by 2025.

The solar panel project is part of an effort to get UB to get 100% of its electricity directly from clean energy sources by 2025.

“(An initiative) nicknamed 'Not All Energy Is Made Equal' means that the electricity load is about 30% of (UB )’s greenhouse gas emissions,” McPherson said. “We worked on how to do it right, how to bring it to zero. One strategy was to buy renewable energy credits … but our overall goal was to buy that renewable energy directly on and off campus. We believe that this is the most responsible task, not just shifting (the footprint) to other communities and places. "

UB is working on the project with Solar Liberty, a west New York company that is the largest solar installer in New York State. Solar Liberty built and operates UB's Solar Strand and has worked with other SUNY schools on solar projects.

According to Hill, the UB project will cost nothing to build and run.

"UB is not responsible for paying any upfront costs," Hill said in a statement. “Instead, Solar Liberty will install, own and operate the solar systems. UB promises to buy the energy the arrays will produce over the next 20 years at an agreed price. "

UB plans to produce 2.9 million kWh with the Bizer Creek solar modules in the first year, which corresponds to an annual compensation of 487 households. This system will cover approximately six acres and house approximately 5,850 solar panels. UB expects the project will create 27 jobs.

The Solar Stroll, which is east of the Millersport Highway next to the Ellicott Creek Bike Path, is expected to produce 8.3 million kWh in the first year, which corresponds to an annual compensation of 1,354 households. The system will cover approximately 24.5 acres and house approximately 16,770 solar panels. UB expects the project will create 37 jobs.

The Solar Stroll should produce 8.3 million kWh in the first year, which corresponds to an annual compensation of 1,354 households.

UB was ranked # 1 in the world for climate action in the 2021 Times Higher Education Impact Rankings. The climate protection ranking "measures the universities' research on climate change, their energy consumption and their preparations for dealing with the consequences of climate change," says THE.

Of the roughly 20 roofs that were originally identified as potential solar panel homes, four were rated “on the right track”, including Baird Hall, the Center for the Arts, the Beane Service Center and the Helm Warehouse. Norton Hall has already installed solar panels on its roof as part of the Solar Strand project. Due to the structural integrity and the systems already in place on roofs, many of UB's roofs are unsuitable for solar panels.

McPherson said the locations of the ground-mounted solar panels – Bizer Creek, off the ramp of I-990 and the bike path – were reviewed under the State Environmental Quality Review Act, which assessed the environmental impact of this project on those locations. According to McPherson, the reviews show that the adverse effects are mitigated.

"We wanted to mandate that after these solar panels were put in place, all of the land cover returned to its natural state in order to create a permanent habitat," said McPherson. “We also wanted to follow the precedent that we were trying to create with the solar string here on the north campus. We wanted it to blend in with nature as much as possible and we are trying to strike that balance between climate action and protecting our environment. "