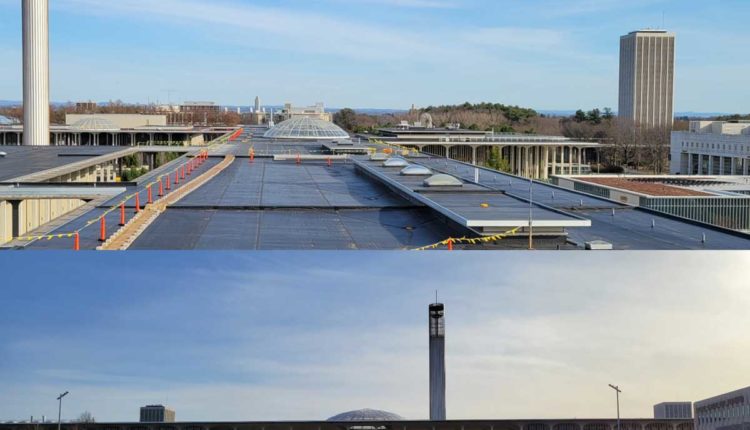 "As part of our climate and sustainability plan, the University of Albany has set itself the ambitious goal of reducing our carbon footprint by 40% by 2030," said UAlbany President Havidán Rodríguez. "That's why we're proud to partner with the New York Power Authority on this solar project – which will help us meet our goals and mitigate the effects of climate change."

Construction has begun on the Fine Arts Building and seven of the roofs of the Academic Podium, which consists of academic and administrative buildings around a large open courtyard with two fountains. The Academic Podium solar PV project is one of many projects in the comprehensive energy master plan that UAlbany is implementing to significantly reduce its energy and CO2 footprint.

Gil C. Quiniones, NYPA President and CEO, said, “The University at Albany is a proven leader in environmental sustainability and a role model for other colleges and universities. This unique podium roof project will present a creative solar solution that makes a state-of-the-art building even more sustainable, while addressing climate change and bringing our state closer to its ambitious goals for clean energy. "

The new systems will meet the power needs of the US $ 180 million ETEC building, which is due to open this summer. Designed as a hub for innovation, science, applied research and commercial development, ETEC will promote interdisciplinary collaborations to tackle complex problems. Inside, students, faculty, and researchers work hand in hand with entrepreneurs to translate new knowledge into creative solutions that will fuel economic growth and create jobs in key industries such as emergency preparedness, climate, weather, and resilience.

The project supports the SUNY Clean Energy Roadmap announced in 2019 by SUNY in partnership with New York State Energy Agencies to accelerate progress towards New York State's goal of 70% of New York's electricity from renewable energy sources by 2030 and on a carbon-free power grid by 2040. In line with this roadmap for the clean energy transition across the 64 locations of the SUNY system, UAlbany has worked with NYPA, who acts as energy advisor, to bring clean renewable energy resources to its To integrate campus. Solar Liberty, one of the largest solar power installers in New York State, designed and will build the project.

“With our installation of a solar system on the social sciences building in 2011 Solar freedom is honored to be a 10 year old SUNY Albany partner. We are excited to expand our relationship with the installation of a large rooftop facility for the Life Sciences Research Building and Academic Podium, ”said Nathan Rizzo, Vice President of Solar Liberty. "SUNY continues to be a beacon for university systems across the country through the use of solar energy, and the scope of this project greatly encourages that effort."

The project is hosted by the campus and UAlbany will purchase all of the electricity and renewable energy credits produced through an electricity purchase agreement. The 4,783 panel system will deliver around 2.3 gigawatt hours of energy. In the first year, it offsets more than 3.6 million pounds of carbon dioxide, the equivalent of 1.8 million pounds of carbon dioxide emissions from coal burned.

How you can Correctly Preserve Your Solar Panels